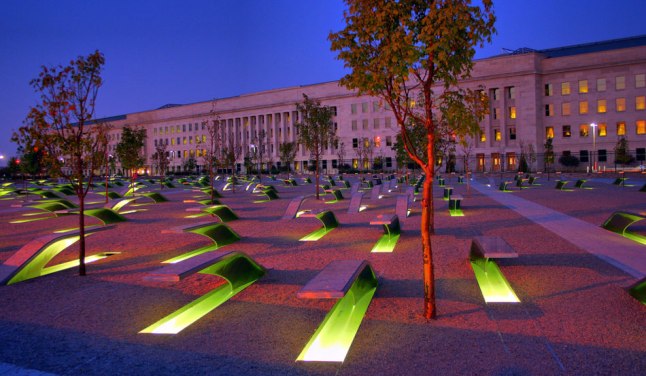 Fourteen years ago today was a pretty ordinary day.  I was your average 7th grade “unpopular” girl – dorky, bullied…I didn’t want to go to school.  In fourth period, my algebra teacher was pulled out of the classroom for a few minutes, but came back and continued the lesson.  For the rest of the day, kids kept getting pulled out to go home.  No one ever said anything.

After school, my dad picked me and the girl we carpooled with up.  As I opened the door of our van, he asked, “did you hear what happened?” I shook my head, no.  “A plane crashed into the Pentagon.”  My heart dropped.  “Where’s mom?”  His response came only a moment later, but the space between my question and his response seemed too long.  I still feel as though my entire life could fit in that space.

Mom was at home.  My brother had broken his arm the night before, and had had an appointment with the orthopedist that morning.  Mom had taken the morning off to take him in, and they’d been sitting in the waiting room at the Fort Belvoir hospital when everything happened.  She didn’t go in when they were done.  My mother is (now) retired from the Army.  In 1998, she was moved out of that first wedge when renovations started and over to NGB Headquarters, 4 miles away.  Because of what she did at the time, she spent a lot of time over in the Pentagon for meetings.  She had been there the day before, she likely would have been there if my brother hadn’t broken his arm.  Things were “fine,” in the way that nothing is fine when everything you know comes too close to the edge of catastrophe.

That moment, standing next to the van outside my middle school, was the moment everything visibly changed for me.  Older generations have Pearl Harbor, JFK, Martin Luther King.  Songs have been written about it.  “Where were you when the world stopped turning?”  I know now that I was in algebra.  That the superintendent had decided that schools would not share the news with students.  We had too many students with parents in the Pentagon, too many military families, too many parents who traveled.  To share the news would have incited mass panic, and the phones were already tied up.  We were just far enough from DC that we weren’t in danger, it was better to maintain as much normalcy as possible.

I’ve always been grateful for that decision.  11-year-old me would likely not have recovered from seeing those images before seeing my mother.  When I finally did see the horrors on the news that afternoon, it was while my mom held me.  I knew, solidly, she was safe.  We, like so many of our friends, were lucky.  Several years later, we talked about how she saw it then, and I found out she had been prepared to go pick up friends’ kids, because we hadn’t heard from them.  They were okay, but we teetered for a while.  The question rang, “why?”  One of our closest family friends had come exceedingly close.  Both parents were military, both worked in the Pentagon.  She was on the other side of the building when the plane hit and went through his office.  He was home sick.  There are so many of these stories.  So many people who wonder why.

My brother is 3.5 years younger than I am, and was 8 at the time.  He watched everything on live television in the waiting room that day.  We both exist, like so many millenials, in a place of “before” and “after.”  We stand at the cusp of having been old enough to know and remember life before the attacks, and having grown up with everything colored by what happened that day.  We both insist on phone calls or texts any time anyone flies anywhere.  We need to know you landed safely, that everything was fine.  That’s where the similarities between my brother’s reactions and mine end.  We stand at wildly different places politically, we have very different world views, colored by the same event.

In college, I had planned to major in International Relations.  Sitting in a class on Human Rights, I discovered that geographic lines had been drawn in experiences.  So many people had just watched the attacks, maybe an aunt or an uncle or a distant relative had died that day, but the attacks weren’t deeply personal to them.  They hadn’t existed in that horribly vast expanse of time between knowing and not knowing.  The attacks had happened here, and that was horrible, but they were roughly as relevant as the tsunami that had devastated Sri Lanka.  I decided, after that semester, to drop the major and switch to Biology.  But I did one more class.  I had the wonderful opportunity to take a Terrorism/Counter-Terrorism course from an FBI agent who had been on the Terrorism Taskforce.  His classes were wonderful, and the case studies we did were cases he had worked.  We covered the 9/11 attacks on 9/11/08.  I sat in the front of the classroom and silently cried through the entire class.

Today, we remember.  We remember the men, women, and children who died at the hands of extremists.  We remember those who sacrificed their lives to save others – the first responders, the passengers and crew of UA flight 93, and the military servicemen and women who have fought in the ensuing conflicts.  We honor the fallen, we honor the survivors.  We thank our lucky stars that our loved ones are safe.

It’s been 14 years since our trajectories were so violently altered.  And today, while we remember and honor the survivors and the fallen, we need to remember to practice tolerance and love.